Helichrysum oocephalum is a medicinal plant of the genus Helichrysum that grows in limited area in Iran. This species is used by locals and therefore, it faces a negative selection pressure and should be protected. For plant genetic conservation, we need detailed data on population genetic variability and structure. Moreover, local geographical populations may differ in their genetic content and form different gene pools. Therefore, we carried out population genetic investigation and morphological studies in five geographical populations of Helichrysum oocephalum that are distributed in Markazi-Khorasan and Razavi-Khorasan provinces. Sixty-eight plant specimens were collected and used for morphological and population genetic studies by using ISSR molecular markers. AMOVA produced significant genetic difference (PhiPT = 0.196, P = 0.010) and revealed that, 80% of total genetic variation was due to within population diversity and 20% was due to among population genetic differentiation. Gst (0.218, P = 0.001), Hedrick, standardised fixation index (G'st = 0.233, P = 0.001) and Jost, differentiation index (D-est = 0.06, P = 0.001), revealed that the studied populations are genetically differentiated. Evanno test performed on STRUCTURE analysis and K-Means clustering produced optimum number of k = 2. These results indicated that we have 2 genetic groups in the studied populations. Morphometric study revealed two major clusters and revealed that populations 1 and 2 are different from the other studied populations. The present findings may be of use in conservation of this medicinal plant in Iran. 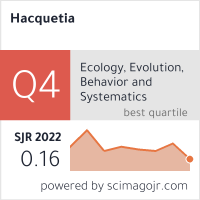