The article analyses the architectural metaphor in Descartes' Discourse on Method and The Seventh Replies (to the objections to Meditations). The idea of Descartes' project, introduced to the reader as the construction of a building and planning of a city, is much more indebted to its architectural imagery than, or so its critics say, is “sound” for a philosophical theory. Architecture is an analogon of philosophy in Descartes' texts, by which the figure of a philosopher-architect is created who legitimizes philosophical theory by using architectural discourse. Descartes always uses the examples of architecture and urban planning when he intends to introduce his great project of a new beginning in philosophy. This new beginning is manifest at two levels: first, as a denial of the traditional metaphysics of the schools in the Discourse, and second, as a denial of one’s own beliefs in the Meditations by using methodical doubt. In its conclusion the article emphasizes, through Derrida's analysis of metaphor, that given the metaphysical nature of any metaphor, Descartes’ metaphor also cannot appear as a mere rhetorical figure. 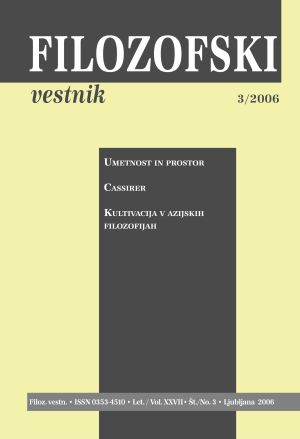