Vulnerability mapping of karst springs and its application for the delineation of protection zones (Mecsek Karst, Hungary)

Over the past decade or two, vulnerability mapping become a useful tool to determine the sensitivity of karst aquifers and allows the analysis of karstic aquifers affected by human activities. The Tettye Catchment, one of the eight catchments of the Mecsek Karst aquifer (SW Hungary), supplies drinking water for Pécs, the fifth most populous city in Hungary. However, due to its partly urbanized character and heterogeneous karstic features, this catchment is highly sensitive to anthropogenic impacts. In this study we aimed to generate resource vulnerability maps and risk maps to assess the role of physical and anthropogenic factors on groundwater vulnerability in the Mecsek Karst. Two formerly validated methods were used, the COP (Concentration, Overlaying layers and Precipitation) and SA (Slovene Approach) methods. The resource vulnerability maps, validated by former tracer tests, were combined with the hazard map obtained from the COST action 620 and EU Water Directive to generate risk maps. Tracer-based transit times were commonly less than 20 days in the majority of the areas of extreme vulnerability. During the current study, a new protocol has been elaborated for the delineation of the protection zones of karstic aquifers. Comparing the two methods, the SA performed better in terms of intrinsic vulnerability mapping, as it had a higher spatial resolution and was more detailed than the COP map and had a more sophisticated vulnerability indexing. In addition, high spatial correlation was revealed between the transit time maps and the SA map. Reassessed risk zonation, with appropriate legal consequences, likely minimizes undesired human activities within the zone of protection, hence maintaining water quality that complies with the protection acts 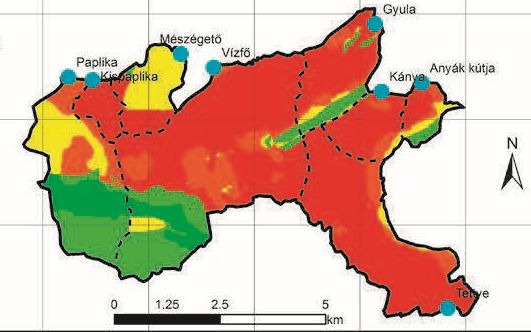