Morphological characteristics and distribution of dolines in Slovenia, a study of a lidar-based doline map of Slovenia

Dolines are small to intermediate enclosed depressions and are the most numerous karst feature in Slovenia. They are circular in plan form and vary in diameter from a few metres to over a kilometre. They are developed in limestone, dolomite, carbonate breccia and conglomerate and occupy different geomorphic settings. They were formed by various processes like dissolution, collapse, suffosion and transformation of caves to surface features by denudation. Publicly accessible lidar data, provided by a nationwide laser scanning project of Slovenia, was used for this study. To catalogue the dolines, we manually label a fraction of the digital elevation model (DEM) with a binary mask indicating if the area is a doline or not. We then train a slightly modified u-net, a type of machine learning algorithm, on the labelled territory. Using the trained algorithm, we infer the binary mask on the entire DEM. We convert the resulting mask into an ESRI Shapefile and manually verify the results. We note that the training and inference are error prone on types of relief that were less common in the training set (e.g., the relatively uncommon collapse dolines). We believe manual verification mitigates most of these errors, so the resulting map is a good basis for the doline study. We have made our georeferenced catalogue of dolines available at https://dolines.org/ (Mihevc & Mihevc 2021). Dolines are found in most of the karst areas, except mountains where they were eroded by glacial action or covered by glacial deposits. We detected 471,192 dolines and divided them into three genetic types. Most abundant are solution dolines (470,325). The average doline is 9 m deep, has a diameter of 42 m and a volume of 14,098 m3. The density of dolines on levelled surfaces can be as high as 500/ per km2. They are absent from the floors of poljes and steeper slopes, and are less abundant on sloping surfaces. We have identified 314 dolines to be of collapse origin. The mean depth of collapse dolines is 49 m, and 20 of them are deeper than 100 m. The mean volume is 1.2 million m3, with the largest having a volume of 11.6 million m3. Most of the collapse dolines can be found close to ponors or springs or corridors where large underground rivers flow. We have detected 553 suffosion dolines formed by suffosion of sediments in blind valleys or on poljes. This basic data set for dolines enables further study and comparison of dolines with the geology and topography of the karst. 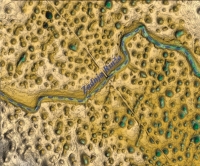