New insights into the genesis of pyroducts of The Galápagos islands, Ecuador

There has been little research on the genesis and development of pyroducts (or lava tubes) originating from Gala´pagos volcanoes. Pyroducts are responsible for the lateral, post-eruptive transport of lava because they are highly effective as thermal insulators. After eruptions terminate, these conduits often become accessible as caves. In March 2014 the 16th International Symposium on Vulcanospeleology brought a large group of vulcanospeleological specialists to the Islands. During the meeting a number of pyroducts were visited and studied in context on the island of Santa Cruz and around Isabella’s Sierra Negra volcano in the western, most active, part of the Gala´pagos. The longest of the caves, Cueva del Cascajo, about 3 km in length, was partly surveyed and nine other caves were visited. Structural features such as thickness of roof, evidence of downcutting, presence of oxbows, secondary ceilings, lavafalls, collapses and pukas were particularly studied for evidence they reveal about developmental stages of pyroducts. The resulting data show that the pyroducts were formed by "inflation" with the primary roof consisting of uninterrupted paŻhoehoe sheets. No pyroducts were identified that developed by the crusting-over of channels. The studies strongly confirm inferences drawn from other hot-spot related islands, such as Hawai’i. 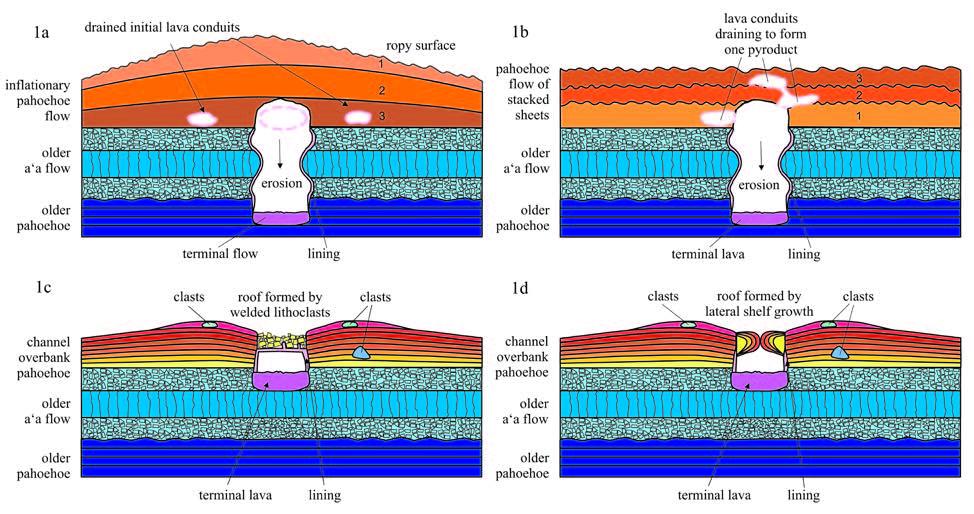