Environmental controls on organic matter production and transport across surface-subsurface and geochemical boundaries in the Edwards aquifer, Texas, USA

Karst aquifer phreatic zones are energy limited habitats supported by organic matter (OM) flow across physical and geochemical boundaries. Photosynthetic OM enters the Edwards Aquifer of Central Texas via streams sinking along its northeastern border. The southeastern boundary is marked by a rapid transition between oxygenated freshwaters and anoxic saline waters where OM is likely produced by chemolithoautotrophic microbes. Spatial and temporal heterogeneity in OM composition at these boundaries was investigated using isotopic and geochemical analyses. δ13C values for stream fine particulate OM (FPOM) (−33.34‰ to −11.47‰) decreased during regional drought between fall 2010 and spring 2012 (p<0.001), and were positively related to FPOM C:N ratios (r2=0.47, p<0.001), possibly due to an increasing contribution of periphyton. Along the freshwater-saline water interface (FWSWI), δ13CFPOMvalues (−7.23‰ to −58.18‰) correlated to δ13C values for dissolved inorganic carbon (δ13CDIC) (−0.55‰ to −7.91‰) (r2=0.33, p=0.005) and were depleted relative to δ13CDIC values by 28.44‰, similar to fractionation values attributed to chemolithoautotrophic carbon fixation pathways using DIC as the substrate. δ13CFPOMvalues also became enriched through time (p<0.001), and δ13CDIC values (r2=0.43, p<0.001) and δ13CFPOM values (r2=0.35, p=0.004) at FWSWI sites increased with distance along the southwest-northeast flowpath of the aquifer. Spatial variability in FWSWI δ13CDIC values is likely due to variable sources of acidity driving carbonate dissolution, and the temporal relationship is explained by changes to recharge and aquifer level that affected transport of chemolithoautotrophic OM across the FWSWI. 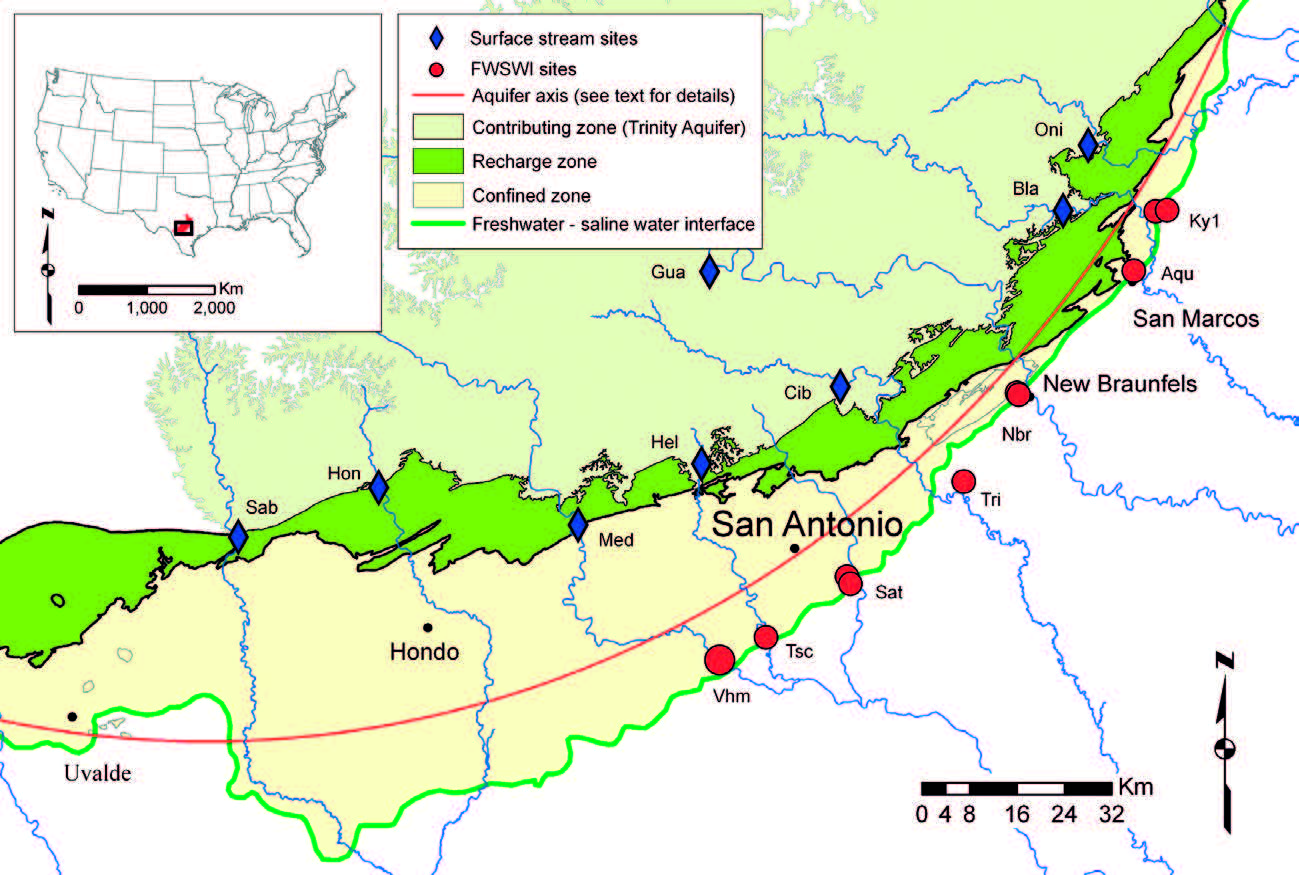