Digital elevation models (DEM) are digital representations of topography that are especially suitable for numerical terrain analysis in earth sciences and engineering. One of the main quantitative uses of DEM is the automatic delineation of flow networks and watersheds in hydrology and geomorphology. In these applications (using both low-resolution and precision DEM) depressions hinder the inference of pathways and a lot of work has been done in designing algorithms that remove them so as to generate depression-free digital elevation models with no interruptions to flow. There are, however, geomorphological environments, such as karst terrains, in which depressions are singular elements, on scales ranging from centimetres to kilometres, which are of intrinsic interest. The detection of these depressions is of significant interest in geomorphologic mapping because the development of large depressions is normal in karst terrains: potholes, blind valleys, dolines, uvalas and poljes. The smallest depressions that can be detected depend on the spatial resolution (pixel size) of the DEM. For example, depressions from centimetres to a few metres, such as some types of karren, cannot be detected if the raster digital elevation model has a spatial resolution greater than, say, 5 m (i.e., square 5m pixel). In this work we describe a method for the automatic detection and delineation of terrain depressions. First, we apply a very efficient algorithm to remove pits from the DEM. The terrain depressions are then obtained by subtracting the depression-free DEM from the original DEM. The final product is a digital map of depressions that facilitates the calculation of morphometric features such as the geometry of the depressions, the mean depth of the depressions, the density of depressions across the study area and the relationship between depressions and other variables such as altitude. The method is illustrated by applying it to data from the Sierra de las Nieves karst massif in the province of Málaga in Southern Spain. This is a carbonate aquifer that is drained by three main springs and in which the depressions play an important role in the recharge of the aquifer. A doline density map, produced from a map of 324 detected dolines/uvalas, identifies three main recharge areas of the three springs. Other morphometric results related to the size and direction of the dolines are also presented. Finally the dolines can be incorporated into a geomorphology map. 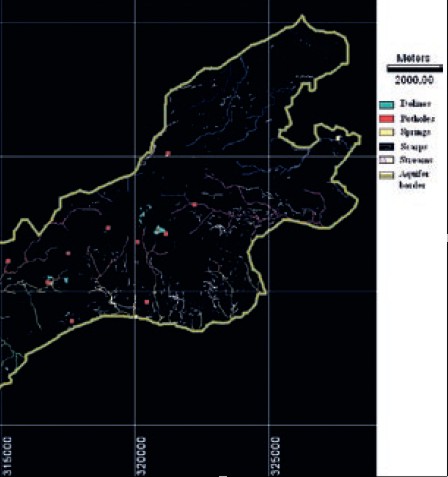