There are two significant karst regions in northern Sarawak (Malaysia): Niah and Mulu. Both are famous worldwide for their well developed caves. Here we document the presence of over twenty unusual stalagmites in six cave entrances in these two regions. One of the stalagmites has been previously described as a crayback stalagmite (Lundberg and McFarlane 2011) and they all show indications of biological influence. Our study aimed to establish the locations within the cave entrances where these stalagmites are present and to provide a preliminary overview of the stalagmite forms. The environment, and especially availability and direction of light, was also studied at several sites. Surface scrapings were examined for the presence of cyanobacteria. The morphology of the unusual stalagmites is variable and includes forms that are elongated and crayback-like and others that show features not previously described in craybacks: flat tops, bulbous protuberances, phototropic rims, irregular grooves and ridges and oriented coralloid growth. Several of these features are not found in abiotic stalagmites and suggest biological control. The findings of light surveys confirm that certain features of the stalagmites are phototropically controlled. Filamentous cyanobacteria with calcified sheaths and coccoid cyanobacteria are present. We propose that this diverse group of stalagmite be named “tufaceous stalagmite” of which craybacks are thought to be a sub-group. 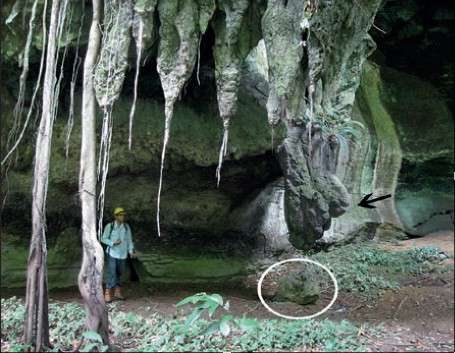