Karst areas of Lunan County southeast of Kumning were studied to understand the role of geological structures in the formation of karst features as stone forest and selected caves. Detailed structural geological mapping of fissure orientation of selected caves and of Shilin stone forest was accomplished and presented by rose diagrams. Regional geological structures were compared with statistical evaluation of structural geological elements obtained from field mapping. There is a good correlation between surface and underground fissure orientation and cave passages orientation with regionally important fault zones, with Xiaojiang Fault (N-S direction) and Red River Fault (NW-SE direction). The most frequent cave passages orientation, in a nearly N-S direction, is connected with nearly E-W compression and nearly N-S extension from late Pliocene to mid-Pleistocene. The second tectonic stage from late-Pleistocene to the present, with the tectonic stress field mainly of NNW-SSE compression and NEE-SWW extension is in accordance with the most frequent fissure orientations in Shilin stone forest in the direction N20-30°W (11.4%). 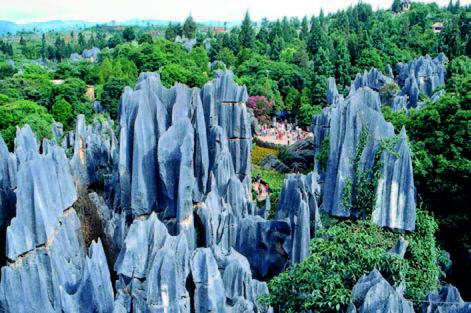