During heavy rainfalls between September 17 and 19, 2010 large part of Slovenia has suffered extensive floods that last for nearly two weeks. For the river Iška record discharge of 59.3 m3/s was measured on September 19 on the gauging station in Iška vas located at the southern rim of Ljubljansko barje. In the first hour of September 21, 2010 two weak earthquakes (ML=0.6 and ML=0.2) occurred within one minute near Iška vas. They were felt by some inhabitants who reported also a rumbling noise (brontides). During the flood recession period, the water of river Iška started to sink into the gravely stream bed or rocky left banks and the gauging profile completely dried on September 23, day and a half after the first earthquake. Water reappeared again on September 25. In the period September 21 − October 4 additional seven weak earthquakes occurred in the same area. All earthquakes from this series occurred at or near the surface and deviate in hypocentral depth from the seismicity pattern characteristic for the southern rim of Ljubljansko barje, which was analysed for comparison. The epicentres of the first two earthquakes are in good agreement with the location of the dried river bed. It is therefore probable that both phenomena are related. Analyses of seismograms have shown that it is not likely that the observed events are collapse earthquakes, but they are tectonic events. Although earthquakes were relatively weak, it seems that they could be accompanied by small near-surface tectonic movements, because they occurred at the position of a known fault. These movements are probably connected to the opening of pre-existing fissures in the karstified valley bottom, although the primary reason for sinking of the river is that high waters removed the clogged river bed that enables intensive sinking into the river bottom during the flood. 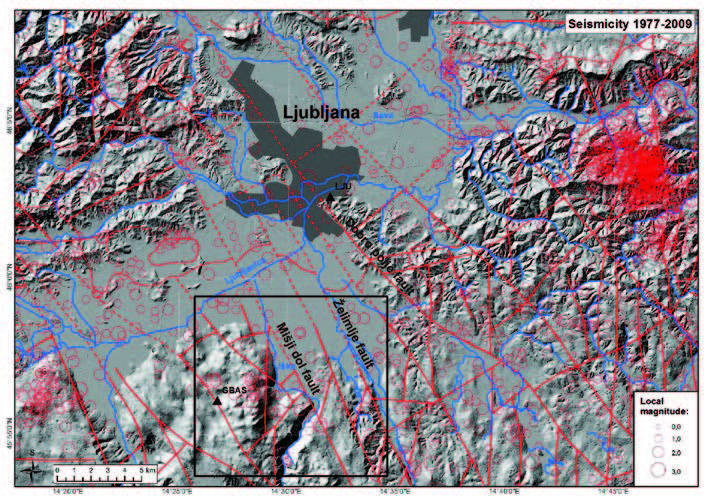