Measurements of the Outflow Along the Eastern Border of Planinsko Polje, Slovenia

Planinsko Polje is the westernmost active polje of Dinaric karst. It is a typical overflow-structural polje, with springs on the southern side feeding the superficial flow of Unica River. The river meanders over the polje towards the terminal outflow area on its northern side, where it sinks back into the aquifer through several ponors. Along the reach in proximity to the eastern border of the polje, the Unica River loses water through several outflow zones into distinct ponors and into a set of small openings and fracture zones. To estimate the outflow rate along these zones, the Unica discharge was measured upstream and downstream to the outflow zone. Seven velocity profiles were recorded with an Acoustic Doppler Current Profiler and the corresponding discharges were calculated. The measurements were taken within four hours during the flow recession following a partial flooding of the Planinsko Polje. Therefore, six outflow zones were evaluated with an outflow rate ranging between 1 m3/s and 5.6 m3/s. The total loss of water along the eastern border summed up to 18 m3/s under the given hydrological conditions. These results give new insight into the functioning of karst poljes and provide an important input for eventual future hydrological modelling of the area.
Key words: polje, outflow, ponors, discharge, Acoustic Doppler Current Profiler, Planinsko Polje, Unica. 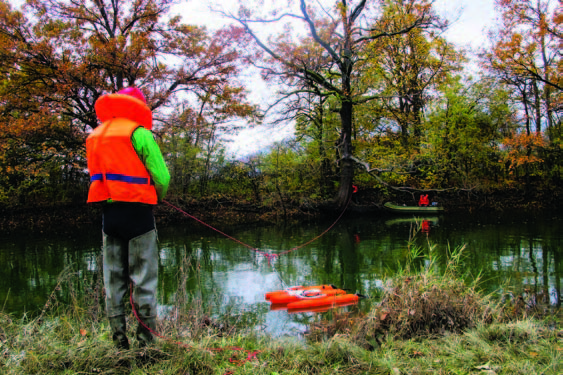