Noctis Labyrinthus is an intricate system of Late Hesperian and Early Amazonian linear troughs and rounded pits connecting the Tharsis volcanic rise and western Valles Marineris next to Martian equator. This study was focused on three light-toned deposits (LTDs) located within a trough located in the western part of Noctis Labyrinthus, centered at −6.8°N, 261.1°E, approximately 60 x 50 km in dimension and with a depth of 5 km below the adjacent plateau. These LTDs located on the floor in the central region of this trough display spectral signature of gypsum and are characterised by the widespread presence of shallow depression morphologies. We performed a morphologic and morphometric analysis of the surfaces of these LTDs through an integrated study of images available through the Reconnaissance Mars Orbiter High-Resolution Imaging Science Experiment with the aim to describe, for the first time, these landforms, and to discuss their possible origins and lithological and paleo-climatic significance. Analysis, on the basis of the characteristics of the investigated landforms and the similarities of features on Earth and Mars, and after discarding other possible origins, revealed that the examined Martian landforms have karst origin. The landform features appear to reflect water-related processes, probably due to ice melting formed during periods of ice-snow-rich deposition from the atmosphere as the result of changes in the obliquity of Mars, which could have driven the processes of dissolution or collapse on the evaporite rock. Thus, the observed karst landforms suggest a climate change and the presence of liquid water due to ice melting during the Late Amazonian age.
Key words: karst, gypsum, shallow depressions, climate change, Noctis Labyrinthus, Mars. 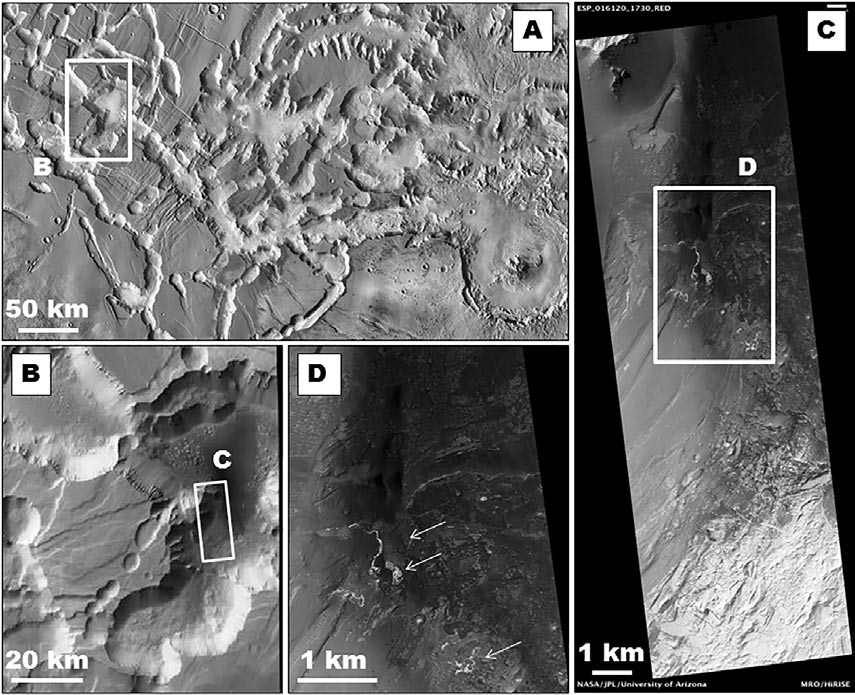