The Lessini Mountains carbonate plateau (Venetian Prealps, Italy) is one of the most important karst areas in Italy. Along with alpine-type caves and well-developed karst landscapes, palaeokarst features are also common. In most cases, palaeokarst is represented by caves and fissures filled by limonitic-haematitic palaeosols (ochres) in which fossiliferous arenite layers are sometimes embedded. These features developed and fossilised during a late Eocene-middle Miocene phase of emersion. Between the Palaeocene and the Oligocene, over a time span partially overlapping the development of palaeokarst, basaltic volcanism took place in the Lessini Mountains. Along with ochre fills, cave passages that were intruded by basalt provide further evidence that a well developed karst network existed in the Lessini Mountains area in the middle-late Palaeogene. Moreover, basalt intrusions provide the only available data for the dating of palaeokarst in the central Lessini Mountains, where fossiliferous layers in ochre beds have not been found. We have started a new survey on palaeokarst in the Lessini plateau, with the aim of identifying ancient features on the basis of unusual fills (namely, ochre and basalt) and morphologies. New instances of basalt intrusions in three caves, Spigola di Canova, Covoli di Velo, and Covolo della Croce, have been recognised; evidence of pre-existing karst features filled by basalt in a previously studied cave (Grotta A Veja) has been identified, and an unusual basalt outcrop that might relate to palaeokarst has also been observed. This paper aims to document the new findings and to discuss previous ones. At the same time, we would like to point out some cautionary observations to prevent a “basalt = palaeokarst” misunderstanding.
Key words: palaeokarst, basalt intrusion, cave fills, Lessini Mountains. 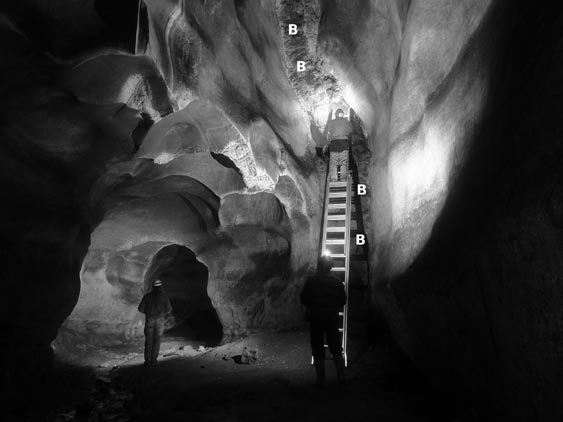