Inactive swallow hole Buco dei Vinchi developed along a plane dividing selenitic gypsum stratum and an underlying shale interlayer, mostly by antigravitative erosion and by post-antigravitative erosion. It formed through six speleogenetic phases starting from a phreatic phase followed by several antigravitative erosion (= paragenetic) and post-antigravitative erosion phases and vadose phase. During first antigravitative erosion phase, the phreatic protoconduits evolved into small antigravitative conduits with typical cross-section in shape of an inversed U or a bulb. At the end of this phase the small antigravitative conduits converged and merged together in successive stages to form ever-bigger conduits, until – at a certain point – most of them flowed into a single, much wider antigravitative conduit, which later evolved into a composite conduit. Wwe demonstrate that the subhorizontal flat ceilings are not a characteristic feature of the antigravitative passages tout court – as claimed by most authors –, but instead they evolved in caves during periods when the piezometric surface was tangent to the vault of the cave (post-antigravitative erosion phenomenon). Thus these flat ceilings are traces of ‘paleo-piezometric surfaces’; moreover these flat ceilings, being sub-horizontal originally, can provide important information on possible tectonic movements or breakdowns occurred after their formation. The possible ages of the karstic phenomena in the selenitic gypsum near Bologna are discussed. This paper points out that the Buco dei Vinchi and the Cava a Filo swallow holes, presently located in “topographic highs”, were very probably in “topographic lows” at the time of their hydrologic activity, and that this is evidence of a relief inversion started at least 127,000 years ago. Therefore the beginning of the first karstic phenomena in the Bologna karst area is much older than this date. It is explained why the absolute altimetrical lowering of the Monte Croara karst sub-area (with respect to the present sea level) should be of about – 0.39 mm/year. 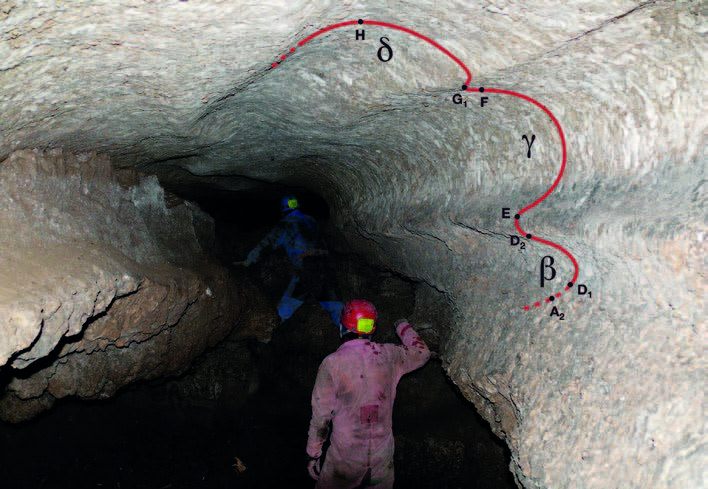