The Pania di Corfino and Ripa di Soraggio are two minor karst areas in Tuscany, having a surface of only 11 km2, but contain more than 100 known caves. Some caves are old epi-phreatic passages testifying to a discontinuous lowering of base level in the two major valleys that cross the carbonate outcrops: the Serchio di Soraggio and the Fiume rivers, respectively located along the NWand SE borders of the massif. The spatial-altimetric distribution of major caves, whichare found on a vertical range of a few hundreds of meters, and their relationships withthe position of surface alluvial deposits have allowed to infer a first evolutionary framework of karst during the late Quaternary. If we refer to a simple model, where fluvial deposition occurs mainly during cold stages and incision during warm stages, the discrete distribution of cave passages suggests that the different epi-phreatic phases are the responses to the alternation of cold and warm periods. In any case, the re-organization of the river network induced by the tectonic uplift had a relevant effect on cave systems. First, the underground diversion of surface drainage enhanced the downcutting of NWand SE peripheral streams, whichreceived a larger quantity of water throughkarst springs due to the favored morpho-structural setting. Successively, the backward piracy of the allogenic catchments of the karst systems by surface tributaries led to the dewatering of caves and to the present situation. 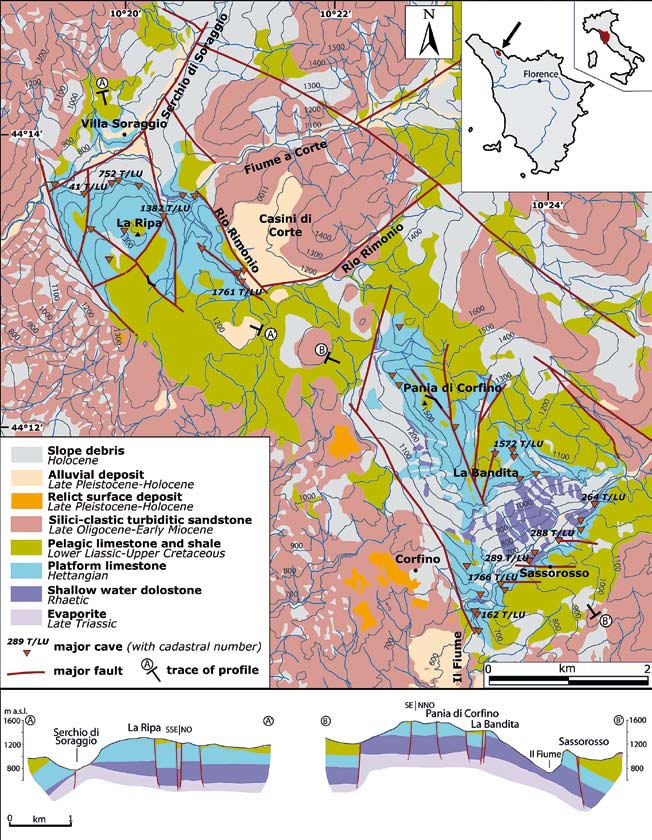