The Monte Conca karst system is located in Central-Western Sicily, where Messinian evaporites are widespread. Here, the evaporites lie on lower Messinian-middle Serravallian clayey-marly-sandy deposits and are overlain locally by Pliocene marly limestones. These successions are affected by E-W, and to a lesser degree N-S and NW-SE, high-angle faults that have also produced lateral contacts between the gypsum units and the clayey-marly deposits. The cave passages reachaltogether about 2.4 km in lengthand 130 m in depth, and the system consists of a sink cave, a resurgence and a relict resurgence. At large scale it is characterized by superimposed levels of sub-horizontal galleries connected by vertical shafts, whichare developed in adjustment to the contemporary geomorphological setting. Until 2003, the sink cave was known to have been formed by a stream-sink, an upper horizontal gallery, a sequence of four shafts and a lower gallery. New explorations have discovered 1.5 km of relict passages that are correlatable withthe inactive resurgence level and that occur at intermediate elevations between the two stories of galleries. Sinks of these relict branches are located headward of the actual sink point, but they have been sealed and covered by thick debris and alluvial deposits from the surface slopes. The resurgence consists of two superimposed galleries, the upper one inactive and the lower one active in equilibrium withthe current local base level. The relict resurgence is located about 40 m above the resurgence and is characterized by a sub-horizontal gallery partially filled by copious alluvial deposits. Analysis of the gallery patterns and of the cave landforms suggests that the karst system is a multi-layer system formed under unconfined conditions. Additionally, analysis suggests that its evolution is due to a succession of stillstand and lowering phases of the karst base level, according to a regional uplifting trend, and to surface slope processes, whichhave complicated the structure of the karst system. 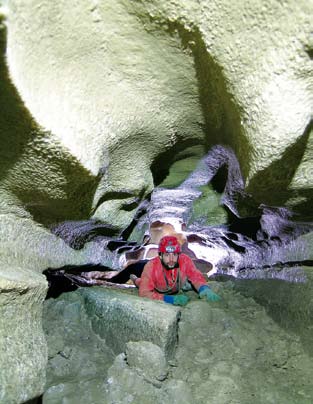