A fundamental difference between caves in sedimentary limestones and those formed in a repeatedly-glaciated 40000 km2 region in central Scandinavia that contains over 1000 individual marble outcrops and has nearly 1000 recorded karst caves is the metamorphic grade of the karst bedrock and its negligible primary porosity. Allied to this is the fine-scale foliation and consequent lack of ‘bedding-plane’ partings. Indeed, the foliation is commonly vertical in the western part of the study area, where sub-horizontal openings must be along joints or other fractures. The deepest cave is only 180 m deep, despite outcrop vertical ranges reaching over 900 m. Caves tend to cluster together and are positioned randomly in a vertical dimension, whilst commonly remaining within 50 m of the overlying surface. Additionally, despite some stripe karst outcrops being several tens of kilometres in length, there are no regional scale caves, and karst hydrological system distances are invariably shorter than 3.5 km. Because the caves are relatively short and epigean and there is a complete absence of long, hypogean, cave systems, speleogenesis by the (chemical) inception horizon hypothesis is unlikely.

A tectonic inception model is derived that proposes that it is only open fracture routes that could provide the opportunity for dissolution and enlargement into cave passages in the Caledonide marbles. It is hypothesised that the dimensions of these fractures are related to the magnitude, and perhaps to the frequency, of local earthquakes and commonly-small tectonic movements that arose mainly from the isostatic rebound that accompanied deglaciation at the end of each major Pleistocene glacial. The openings formed along inception surfaces between the limestone and adjacent aquicludes and at inception fractures that are entirely within the limestone and are commonly (though not universally) parallel to, or orthogonal to, the foliation. The model builds on reports of a ‘partially detached’ thin upper crustal layer in similar settings in Scotland and is supported by observations of later neotectonic movements, as indicated by sharp edges and slickensides in most present relict cave passages and sporadically on the surface. 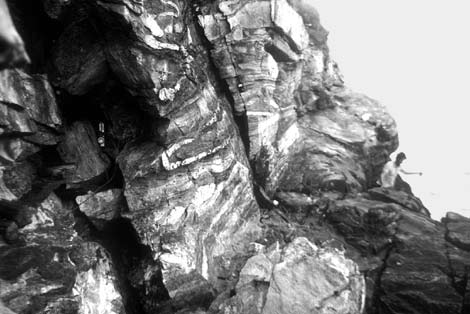