With the intention of reconstructing Late Pleistocene – Holocene sea-level changes along the Eastern Adriatic coast, a series of speleothems were collected from several submerged caves and pits, in order to constrain periods of their deposition and ceased growth related to sea-level fluctuations. For that purpose, stalagmites provide more reliable records than stalactites, due to their successive layers deposited perpendicularly to the growth direction. Therefore, stalagmites have been collected preferably. But, two of 17 speleothems displayed unexpected interior morphology – speleothem L-1 collected at the depth of 1.5 m in Medvjeđa spilja Cave on Lošinj Island, and speleothem M-25 from Pit near Iški Mrtovnjak Islet collected at the depth of 25 m. Both of the samples were taken from the cave floor, in the growth position of the stalagmite. But the insight into the perpendicular cut with evident central tube revealed their true (stalactitic) origin and additional confirmations were obtained by longitudinal cut and U-Th and 14C dating. Just as the causes of their breakdowns were probably different, so were their falls; speleothem M 25 (together with several other speleothems around it) stuck in the marine sediment in its primary position, while L-1 turned upside-down and even continued crystallizing during the lower sea level. These events are possible in the continental caves, as well. Evidently, it is much easier to recognize and avoid these problems in air-filled caves than in the submarine ones where the speleothems are almost always covered with marine overgrowth, which disguises their outer morphology. Additionally, the bases of the stalagmites are also sometimes covered with marine sediment, which makes correct estimation rather difficult. 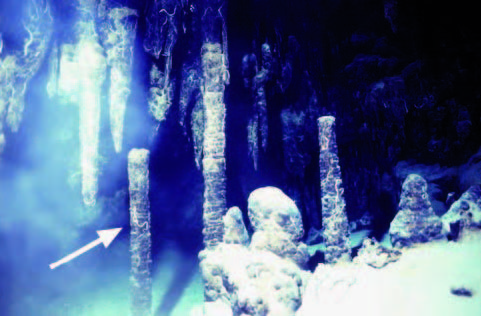