Netopirjev Rov, part of the upper level of Jana near Predjama Cave, is not a former fluvial cave passage but a complex void made up of coalesced, structurally guided elongate cavities with cupolas and a range of speleogens normally associated with hy­pogene caves. These cavities were initially separate and later became integrated by the breakdown of their common walls. The main chamber consists of at least two coalesced voids while an apparent bend, a pseudobend, towards the northern end of Netopirjev Rov results from the breakdown of the com­mon wall near the ends of two adjacent elongate cavities. It is proposed that this section of cave was excavated by the action of water rising from below (per-ascensum speleogenesis), but the nature and source of this water remains unclear. 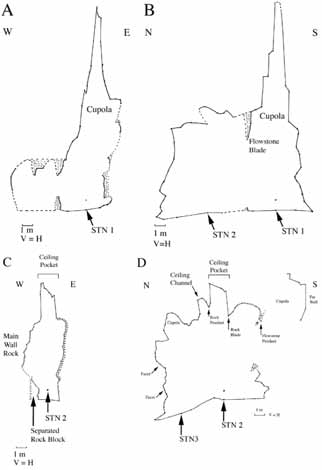