Cansiglio is a limestone plateau located on the border between the regions of Veneto and Friuli-Venezia Giulia, northeastern Italy. The eastern area is characterized by a thick succession of Cretaceous peritidal carbonates, while the central western part is characterized by slope breccia deposits. Even thoughPian Cansiglio is an important karst system, its hydrogeology is poorly known. Three important springs that form the Livenza River are located at its southeastern border and are thought to represent the majority of karst aquifer discharge, but no experimental data are available in the literature. Gruppo Speleologico Ferrarese explored an 800 m deep cave (Abisso Col de la Rizza) on Pian Cansiglio, whichprovided the opportunity to conduct tracer tests. Fluorescent dyes were injected in September 2008 in Abisso Col de la Rizza (uranine) and in Bus della Genziana (tinopal CBS-X). Over a period of three months, local cavers conducted an intense sampling programme, whichincluded collecting water samples, charcoal bags and cotton lints. Automated samplers were used for highfrequency monitoring at two of the springs. Tinopal was not detected, so the connection between Bus della Genziana and the springs was not demonstrated. The connection between Abisso Col de la Rizza and two of the springs was demonstrated by uranine. A mean velocity of 248 m/day results from the tracer concentration peaks; intense rainfall events increased the flow velocities four to five times. Different hypotheses are considered in order to explain the low mass recovery rate (32-40% of the injected mass). The uranine tracer test demonstrated that Pian Cansiglio aquifer contributes to the two Livenza springs; it also opens a question about the third spring, whichprobably originates from the Mount Cavallo area (another limestone massif close to Pian Cansiglio). The rapid response to rainfall recharge suggests a vulnerability of the spring system, further supporting the importance of conducting a detailed hydrogeological study. 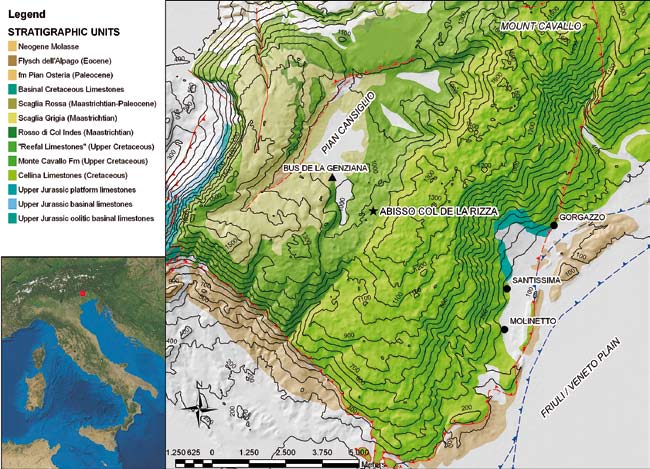